Before any ball earns the right to be inscribed with the Storm insignia, it has to pass through a rigid on-lane performance test. This has been the case since the first Storm ball was poured over two decades ago. The process has been refined since, of course, to a level of commitment that is worthy of your passion and enthusiasm for the sport we all know and love. One could say, it has “evolved”.

THE GRAVITY OF THE SITUATION

As always, a new Storm ball is only introduced when it satisfies a real performance need. Steady, unbroken improvement is a core value at Storm.

The game has changed and so should we. Stepping back, we realized amateurs and professionals around the world have been clamoring for a heavy-rolling, fast-migrating core akin to one of the most famous of all-time: The Shape-Lock HD Core. This shape can power through just about anything. “HD” is short for high density, which lowers the RG and raises the differential of the weight block. A higher differential translates to more flare potential, so every time the ball makes a rotation it exposes a fresh portion of coverstock material to the oil.

Fresh coverstock is important, but the type of coverstock is equally as vital. SPEC has been highly well-received since its inception on the Crux™ Prime. It “sticks” to the lane, almost like Velcro®. After further testing, the Gravity Evolve not only grabs the lane differently than its Reactor™ or NRG™ based covers, but things want to grab it in return i.e., oil. Compared to R2S™, SPEC’s flare rings, on average, were 5.7% wider at the exact same surface preparation. This could also be in part because the oil absorption rates for SPEC are five times slower than our next leading coverstock. Expect heavy roll with no shortage of higher scores and more strikes.

Storm – We are “The Bowler’s Company™”

“HD is short for ‘high density’, which lowers the RG and raises the differential of the weight block.” 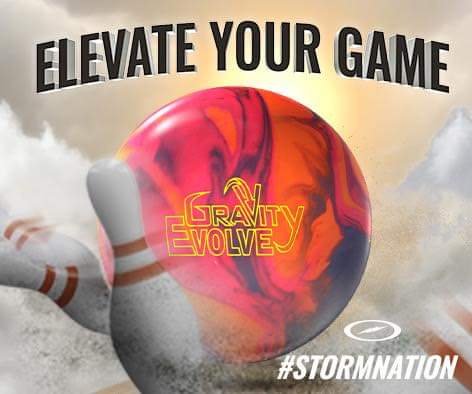