ARLINGTON, Texas – Jason Belmonte recently spent eight days enjoying a relaxing holiday on the quiet beaches of northern New South Wales, Australia, but don’t think the sunshine and sandcastles distracted him from the wave of success he’s been riding on the Professional Bowlers Association Tour in 2019.

The 36-year-old two-hander is having a career year that includes four titles and more than $275,000 in earnings. He leads the PBA Tour in prize money, points, average and championship-round appearances – 11 in 18 events – and he’s put himself in position to be the PBA Player of the Year for the fifth time.

More than a decade into his professional bowling career, Belmonte’s success in 2019 isn’t new, but it’s different.

Much like the Pottsville coastline he recently walked with his wife and three children, there have been high and low tides, but, ultimately, there’s harmony and balance, which often requires as much work as mastering lane conditions and hand positions.

“I like to live my life in a balanced way, and that takes work, but it has become even more important as our family has grown,” Belmonte said. “If I don’t spend time with my family and get the R&R (rest and relaxation), my bowling suffers. If I bowl too much, the family aspect suffers. The recent trip is something we started planning in January, and for our calendars to align and allow us to do that, was incredibly special.”

Belmonte’s wife, Kimberly, is a registered nurse, and their children – Aria, Hugo and Sylvie – keep busy with school, sports and other activities, so the stress-free getaway was rare and appreciated. It also gave them a chance to visit with friends and family.

Now recharged, Belmonte is ready to focus on the next major stop on his travel itinerary – the 2019 U.S. Open.

When his family goes to bed each night over the next 10 days, the 22-time PBA Tour champion will be on the lanes working on everything from playing different parts of the lane to using a variety of releases to help make sure he’s prepared for the challenging oil patterns he’ll face at one of bowling’s most mentally and physically demanding events.

Practicing at night also aids in maintaining the life balance and allows him to give his full attention to each important aspect.

He will be among the 144 competitors at the upcoming event, which will take place at Victory Lanes in Mooresville, North Carolina, from Oct. 23-30.

A pre-tournament qualifier will be held Oct. 23, and the three days of U.S. Open qualifying will begin Oct. 25. The tournament will conclude live on CBS Sports Network on Oct. 30 at 8 p.m. Eastern.

And, even though winter in Australia is over, Belmonte would love to return home wearing a new jacket, the coveted green jacket given to each U.S. Open champion. It’s something he’s never experienced, despite owning the most major titles in PBA Tour history with 11, including two this season.

In 10 appearances at the U.S. Open, Belmonte has a pair of top-five performance. He finished second to Wes Malott in 2013.

“It’s a tricky psychological thing to not constantly think about the U.S. Open being the one I haven’t won,” Belmonte said. “I believe I have the ability and that sometime in my career I’ll win it. I know this won’t be my last one, so there’s no added pressure there. I’m hoping that someday the stars align, but I’m not looking at this as a must-win. I’ll certainly give it my all, and if I execute to the best of my ability, there’s no reason I can’t be in contention.”

Belmonte won two of the season’s first four majors, the PBA Tournament of Champions and PBA World Championship, while finishing second in the PBA Players Championship in between. The victory at the World Championship moved him ahead of Pete Weber and Earl Anthony, who each own 10 major titles.

In the year’s other major, the United States Bowling Congress Masters, a severe finger injury kept Belmonte from making a run in the storied event, one he has won a record four times. He finished 169th.

Even when he’s at his best, Belmonte sometimes has to battle the jet lag that comes with traveling more than 10,000 miles to compete on the PBA Tour. It’s not an excuse, but it is a reality that can slow him down early in an event.

This is something he has worked on during his career, with the ultimate takeaway being that winning doesn’t mean leading from Game 1.

This time, though, he’ll already be acclimated, since he’ll be in the United States early to compete in the PBA Clash, a special event featuring the top eight money winners from the 2019 season.

He’s hoping the combination of comfort and confidence lead to success at Victory Lanes.

“Success leads to confidence, and a wave of confidence in any sport definitely helps the athletes do well,” Belmonte said. “I feel like it has been a decade-long wave for me, and the last 10 years have gone better than I ever could’ve expected. I enjoy the format at the U.S. Open, and I’ve bowled well, even though it hasn’t ended with me holding the trophy and wearing the green jacket.”

Competitors at the 2019 U.S. Open will bowl 24 games of qualifying over three days, before the field is cut to the top 36 performers for a cashers’ round, which will whittle the field down to 24 bowlers.

Each day will feature eight games on a different oil pattern. The cashers’ round, all 24 games of match play and the televised finals all will be contested on the same lane condition.

As much as Belmonte has embraced his role as a pioneer in bowling, he also appreciates the sport’s long history and those who paved the way for him to make a career on the lanes.

When it comes to the U.S. Open, he recognizes the toughness of those who have been able to navigate the 56-game grind and find success at one of the sport’s most prestigious tournaments.

He expects to be exhausted, but proud, when the 2019 U.S. Open concludes, win or lose.

“This event should always be a grind on some tough conditions, and you should want to sleep for a long time when it’s over,” Belmonte said. “Even though I haven’t won, I’ve always been drained, in a good way, when it was over. It would mean everything to win a 12th major and the green jacket. It’s probably the most prestigious event, and if you look at the list of winners, it is one I absolutely would love to add my own name to.”

Belmonte’s maturity and balance extend beyond his home or the bowling center, and he’s constantly preparing for the day when traveling and bowling no longer make sense for him and his family.

Built into his daily responsibilities are other points of focus and roles as an ambassador and entrepreneur. He’s using his influence to grow the sport globally and building his own brand to help secure his post-bowling future.

He spends countless hours making appearances and participating in projects that help bowling’s visibility, like his recent partnership with NASCAR’s Aric Almirola, in which the two teamed up at Charlotte Motor Speedway to record the world’s fastest strike.

Almirola drove around the track at 140 miles per hour, and Belmonte threw a bowling ball out of the car window into a full rack of pins.

The feat received hundreds of thousands of views, gaining exposure for both sports. Bowling fans got a closer look at NASCAR, and the NASCAR nation got to learn a little about bowling.

Within the industry, Belmonte recently has contributed to bowling ball designs and a “Belmo” line of merchandise and apparel, along with his own video game. He also has a huge presence on social media and is very engaging with the fans.

On the horizon is a documentary he hopes will entertain bowlers and fans and show the sport in a whole new light for mainstream viewers.

For the upcoming U.S. Open, he helped create an event-specific pair of bowling shoes that features the tournament’s colors and design aspects from the event logo. The shoes certainly will be a talking point and a way to share and celebrate the history and prestige of the event.

“My life philosophy is to go to bed knowing I’ve done everything I could to be successful and fulfilled,” Belmonte said. “Ultimately, bowling is me. So, if I can find ways to help make it bigger and better, I will.” 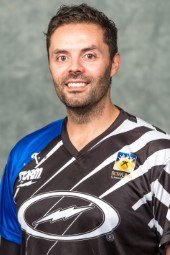