In the two two-game total pinfall rounds that used a round-robin format conducted over four lanes on the PBA 42-foot Mark Roth lane condition pattern, O’Neill, the 2019 PBA Playoffs runner-up, led the Group 1 round with a 983 four-game pinfall total to earn the top seed for Sunday’s Group 1 stepladder. He bowled games of 280, 233 in the first round and 234 and 236 in the second round to earn the top seed.

“Each pair of lanes played totally different for me but I was able to make smart adjustments and if I had a good shot on a particular pair I was able to take advantage of those opportunities.” said O’Neill, who won the season-opening PBA Hall of Fame Classic for his 10th tour title. “My philosophy heading into match play is just as it was for today and that is to keep an open mind so I can get a good read on how the lanes are playing and continue to make good adjustments.

“You just take what is given you,” said the 25-year-old Butturff. “I was fortunate that I was able to stay focused and really able to bowl my game today. There wasn’t anything really tricky orsurprising for me and that allowed me to keep the momentum I had from the first two games going into the second round.”

The final match of each group’s stepladder will be a “race to 2 points” match with each game worth one point and, if the two games are split, the final point is awarded by a 9th and 10th frame roll-off. The two group winners will then meet in another “race to 2 points” championship match that will also use a 9th and 10th frame roll-off should there be a tie after two games.

The eight players earned their berths in the PBA Tour finals by finishing in the top eight in GoBowling! PBA Tour points over the past two seasons ending with the 2019 USBC Masters in April. 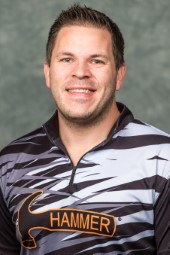